HILTON HEAD ISLAND, S.C. (April 28, 2019) – Linda Hartough, world-renowned golf-landscape artist (www.hartough.com), and a 2017 inductee into the Lowcountry Golf Hall of Fame, was in attendance at the gala April 26 as her original oil painting of the 10th Hole at the Hills Course at Jupiter Hills Club, in Tequesta, Fla., was unveiled and presented to the club. The occasion was part of a weekend-long celebration of the club’s 50th anniversary.

“The challenge was expressing the unique character and beauty of the layout, but I found the view and the dramatic lighting that captured it all on the 10th Hole looking back towards the iconic clubhouse on the hill,” Hartough said. “The large size of the painting provided me the opportunity to bring the viewer authentically into the scene to experience the exceptional features of the course.”

Established in 1969, Jupiter Hills Club, a member-owned facility, has a rich history. It was founded by George Fazio, who designed the original golf course; automobile magnate William Clay Ford Sr.; William Elliott, of Philadelphia; and Bob Hope, the iconic entertainer, who was a good friend of Fazio. The original layout was built on a series of ancient sand dunes. Thirty years later, Fazio’s nephew Tom Fazio, who had assisted on the original design, completed a renovation which restored many of the early characteristics, emphasizing the prominent sand ridge on which his uncle had first routed the course.

Jupiter Hills Club has been the site of two USGA events: the 1987 U.S. Amateur and the 2018 U.S. Amateur Four-Ball Championship.

Hartough’s painting of the par-4, 408-yard 10th Hole is 32” x 56” unframed, 42” x 66” framed. It was commissioned by Mr. and Mrs. Robert Hofmann, who donated the work to the club. The signed work now hangs in the clubhouse foyer above the fireplace, alongside the U.S. Amateur trophy and the U.S. Amateur Fourball trophy, and near the portraits of the club’s four founders.

“Jupiter Hills Club is one of the great golf clubs in America,” said Hofmann. “What better way to commemorate our club’s 50th anniversary than by having a painting by golf’s leading artist, Linda Hartough

“She captured three characteristic components of Jupiter Hills: the rolling fairways, unusual for a Florida course; the sandscapes on both sides of the 10th Hole; and our beautiful clubhouse at the top of the hill.” 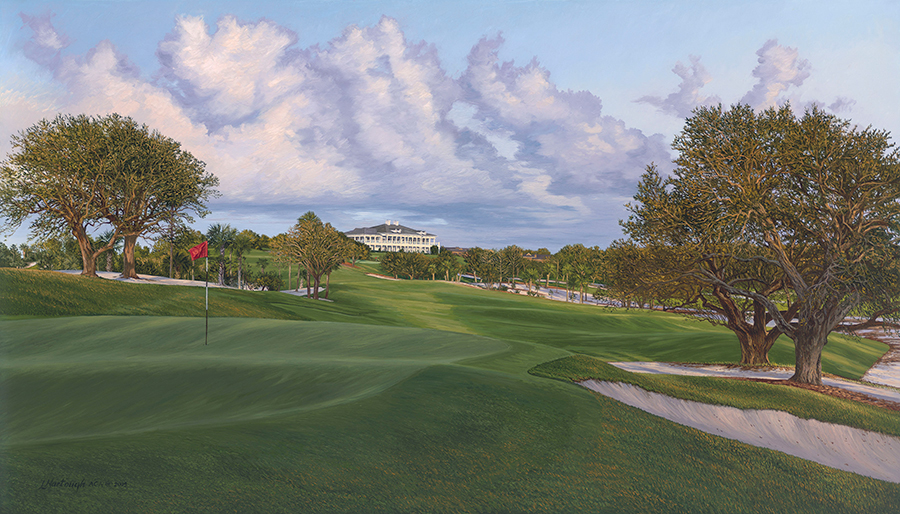 A confirmed artist since childhood, early in her career Hartough painted landscapes, portraits and horses. In 1984, Augusta National Golf Club commissioned her to paint its famous 13th hole, an event which propelled Hartough toward specialization as a golf-landscape painter. Since then, her work has achieved a distinguished status, displayed in the permanent collections of such legendary clubs as Augusta National, Laurel Valley, Pinehurst and Pine Valley, as well as in the personal collections of such golf notables as Jack Nicklaus, Raymond Floyd and Rees Jones. Her work is included in the collections of the USGA Museum, in Far Hills, New Jersey, and the Morris Museum of Art, in Augusta, Georgia.

Known for extraordinary attention to detail in her recreation of some of golf’s most beautiful holes, Hartough imbues her paintings with admiration for the scenery’s natural beauty and respect for the game’s history and tradition, elements which seem to emerge from the canvas.

Hartough’s paintings of various holes at Augusta National Golf Club are prized by collectors the world over. In addition, Hartough painted the first of her U.S. Open series in 1990 – commissioned by the U.S. Golf Association – a 25-year series she completed in 2014, as well as her official British Open Championship series, from 1990-1999.

Hartough has been honored with the Golf Digest Lifetime Achievement Award. She is a Founding Trustee of the Academy of Golf Art, a professional society of golf artists established in 2004 to create an awareness and appreciation of golf art as a valuable segment of fine art.

Linda Hartough is recognized as one of golf's leading artists.